Fishing reel was invented from Chinese paintings and records beginning about 1195 AD. It first appeared around 1650 AD in England and by 1760, London started to advertise multiple gear retrieved reels. Around 1820, fishing reel getting more popular among angler and the commercialization of the fishing industry came at a time for people to keep interest on fishing as a recreational hobby. From contemporary and modern reel design, the fishing reels improve years by years to make sure it spooled out freely and was ideal for allowing bait to drift along the current. In parallel with that, a lot of branded company such as Shimano and Daiwa started to issue and develop special equipment for fishing industry like electric fishing reel. Both of them are the most popular and dominant in specializing fishing reels around Malaysia. In Lelong, we are one of online store whom offer a best deal and price to shop online for fishing reel! We selling branded fishing reel from shimano fishing reel and daiwa fishing reel with the affordable price and good quality. Don’t worry about a timing because our courier proven with fast shipping and come with a better services than before. Let’s ‘catching’ together with Lelong! 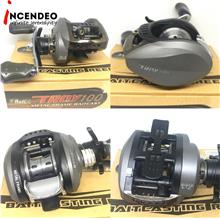 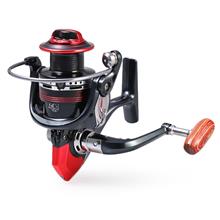 1. Fly reel - A fly reel is a single action reel normally operated by stripping line off the reel with one hand while casting the rod with the other hand. It is purposely to store line and provide smooth uninterrupted tension and counterbalance weight of fly rod when casting. It divides by two systems for instance Fly Reel Operation and Fly Reel Drag System.

2. Centrepin reel - During 1950s and 1960s, many anglers in England began fishing with a centrepin reel. It knows as centerpin, center pin or float reel which runs freely on its axle to permit distance cast by allow the line to be drawn off by the momentum of the cast from the rotating reel. It is historically and currently used for coarse fishing.

3. Baitcasting reel - The bait casting reel or revolving spool reel is a multiplying reel. It comes at least the mid-17th century but came into wide use by amateur anglers during the 1870s. It comes in different sizes, capacities and features. They have better accuracy than other types. Bait casting reels are better at handling heavier line and lures.

5. Spinning (fixed-spool) reel - Early 1870s, fixed spool reels were use in North America and were originally developed to allow the use of artificial flies or other lures for trout or salmon. It normally mounted below the rod and this positioning conforms to gravity, requiring no wrist strength to maintain the reel in position.

6. Spincast reel - It was first commercial by the Denison Johnson Reel Company and the Zero Hour Bomb Company (ZEBCO) in 1949. The purpose is to solve the problem of backlash found in baitcast designs while reduce the line twist and snare complaints. They were widely used and become popular during the 1950s and 1960s and remain a favourite fishing tool for catfish fishing and also for young beginners in general.

Brands related to Fishing reel including :